On October 19 Fortune published an article with the headline:

“30 Years after Black Monday, the Dow Hits an All-Time High”.

The article goes on to speculate:

“only time will tell if we have another crash ahead of us. But in the meantime, investors seem to think that skepticism and caution may be just what we need to avoid one.”

Connecting the all-time high to the Black Monday crash from over 30 years ago smacks of the kind of fear driven nonsense that characterizes much of financial markets journalism these days.  The article raises the temperature further by pointing out that:

“this marks the fourth thousand-point milestone for the Dow this year, painting a very different picture than what was seen in 1987.  According to the Wall Street Journal, the Dow had never before hit more than two of these milestones in a year.”

Transforming meaningless data points into blood pressure raising insights is a coveted skill for both market journalists and stock market analysts alike.  After all it’s their jobs to get people to act – stock analysts to compel trades, journalists to direct readers/viewers to the skilled money managers that advertise in their pages or on their programs.

I’d be a poor headline writer.  The first one I came up with, “Dow Hits an All-Time High more than 500 Times Since 1987 Crash” wouldn’t inspire much fear or anything else.  The fact is that markets go up most of the time as is clearly displayed in the index data series shown below courtesy of Dimensional Fund Advisors. 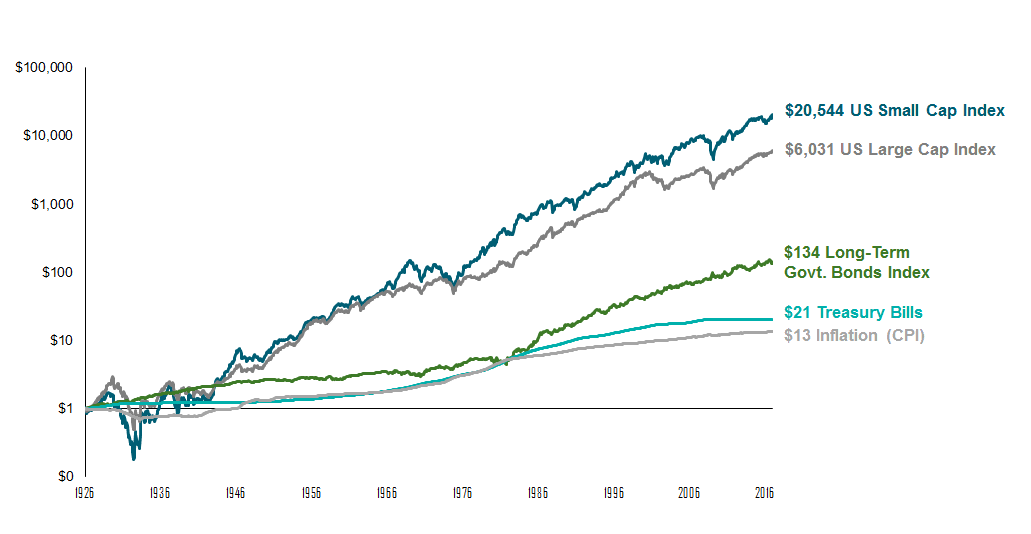 All time highs are run of the mill business for indices in most asset markets.  But that doesn’t stop people trying to misrepresent the significance of a fairly mundane data point.  Some even try to either directly or indirectly take credit.  It’s clearly been a favourite tactic of Donald Trump since he’s become president.  This straight from the Trump playbook in August:

And he wasn’t even talking about the economy or taxes at the time.  Rather, he was announcing an immigration plan.   Surely there’s a Saturday-Night Live sketch in there somewhere!

Others are a little more transparent in their use of the tactic.  I love this headline from Annuity Watch in March of 2013 which warns:

“Stock market reaches all-time high, but now is not the time to celebrate.”

The article was quick to point out that:

“the previous high was hit back in October 2007 when the country was mostly blind to the upcoming financial crisis.”

And of course the way the article suggests to avoid falling off the cliff of the next and imminent financial crisis is….you guessed it……to leave the stock market’s perils behind and purchase an annuity instead.  That all time high in March of 2013 was of course when the Dow had hit the dizzying height of 14,253.  If that wasn’t the time to celebrate, is it now?  Probably not if you’d bought an annuity in 2013.

The bottom line is that those who try to attach significance to data points like “All time highs” are trying to get you to do something or think something that is in their best interest, not yours.  The market is pretty regularly hitting all time highs.  It just doesn’t tell us anything about what’s going to happen in the near term future.

That doesn’t mean you shouldn’t be concerned about the pattern of stock market returns as you approach retirement.  The market will go down at times and could go down significantly.  As you approach retirement you need to be especially certain that your investment portfolio is attuned to your need, willingness and ability to take risk as it may be your main source of income.  Some important things to keep in mind are:

Over the medium to long run the market will continue to hit all time highs but over shorter periods it may go down or it may go up.  It’s important to come up with a plan in advance so that when the next downturn does happen, rather than speculate and worry, you act with confidence.  In the meantime enjoy the next all time high – it’s probably right around the corner.